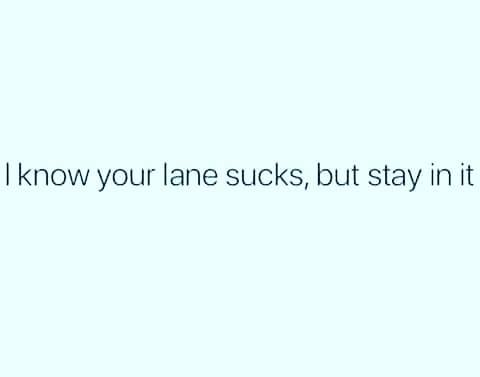 Nothing like driving down the road minding your own business, rocking out to some awesome tunes, singing really loud, when someone decides they want to drive in your lane.   I don’t know about you but that irritates me soooooo bad.  And then to top it off, they DON’T use a blinker either.  Do they think this is Price is Right…. “Come on down”  Other drivers get on my nerves.  They don’t use blinkers, they go too slow, go too fast, weave around, in and out of traffic with no consideration for anyone else on the road.

And what about those damn crotch-rockets.  OMG you may see me on the news one day for opening my door on one when they go squeezing in between a bunch of cars NOT IN THEIR OWN LANE, NOT IN ANY LANE, riding up the marked line.  Do they think that line is there for them to ride up?  And the ones that do all these tricks while riding up the road, getting up on 1 wheel, doing weird stuff when riding.  On the interstate is even worse CLICK HERE and HERE In Atlanta, you see people on 4wheelers on the road.  I mean for real?  Is that not illegal?  Cops driving by not saying a thing to them.   VIDEO HERE People already fear going downtown, now it is way more scary.

Lets not forget the interstate drivers that want to drive in the left lane going slower than most of the normal traffic.  Really?  I have to pass you on the right?  hmmm, I don’t think it is intended to be that way.   Florida will now ticket you for doing that.  READ HERE Oh and lets not forget about the emergency lane on the interstate, this is NOT a lane to drive in people.

Any way, I am by far NOT the best driver out there, but at this point, I don’t even like to drive to the store, I feel more defensive than offensive.  I think getting rid of drivers ed in schools is a large problem.  Not everyone can afford to send their kid to one of those driving schools.  People pay attention to where you are going, slow down, stop being in such a hurry, be courteous to your fellow driver, and use your blinker, but most of all STAY IN YOUR OWN LANE 🙂